World Building is Not Just For Science Fiction and Fantasy Novels 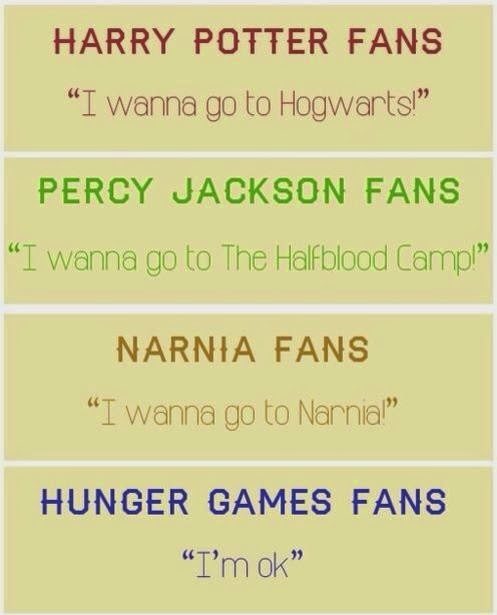 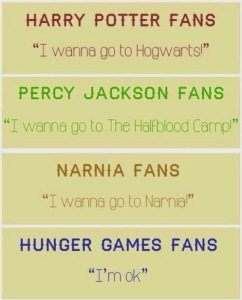 I follow a reading group on Facebook centered on the appreciation form the fantasy and science fiction genre. Yesterday they posted the following picture in honor of the new movie Catching Fire. What occurred to me in the joke, besides the fact that it is entirely true, is that it emphasizes a key component in this genre, which is world building. I’ve discussed the topic before. Go to any writer’s convention with the genre present and you will certainly find a class on how to build the world. That, after all, is part of the flavor for reading. I saw a quote by George R.R. Martin “They can keep their heaven. When I die, I’d sooner go to Middle Earth.”

We want to experience the author’s imagination to the fullest. We want to live in a place unlike our own world. It’s that part of human curiosity that sends us exploring the ocean and space. Surely there are places unlike anything we have ever seen. The story is sometimes secondary to the place in Science Fiction and Fantasy.

However, I think that authors have to “world build” no matter what genre they are writing. In fact, world building in essence is not constructing a new land, but rather as part of characterization. What “world” does the character live in? I remember an English teacher saying Jane Eyre read too many books as a child and therefore did not have a grasp on what real life was. Her understanding of the world is that it should operate as her novels do, which is probably why she fell in love with Edward Rochester in the first place. It is also true that a teenager’s world is far different than an adult’s. Think of the YA books and their love stories. They are intense. They proclaim the idea that love will last forever, even if that love is a burden on those around them. It is the most important aspect. As someone who works with the age group, I can say this is accurate.

But the characters don’t have to be “unworldly.” Let’s look at John Proctor in The Crucible. The world he lived in was not fantasy or science fiction, so-to-speak. Yet, it certainly is not the world that I live in today. Sure, that’s a historic piece (which probably has more emphasis on accurate world building), but current literature builds worlds as well. Is it a book that takes place in Washington DC? That book would be different from the “world” perspective of a diplomat versus a pizza delivery man. Keep the same characters and move them to New York and the entire world changes. Or, better yet, small town America. What we’re really talking about here is setting. But I ask to extend the thought. Setting builds the character’s “world.” Part of the intrigue in any genre is becoming a part of that character’s lives and how they perceive the world is a part of the plot…or should be.