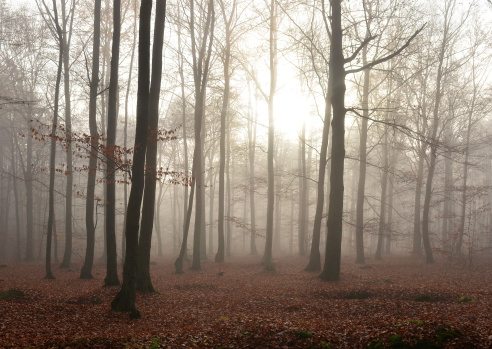 For the month of October, I thought I’d share a cryptic short story I wrote a few years ago. If you all like it, I might turn Friday’s into short story sharing. So, here’s the first part of my short story:

Leaves crunched, ground against the dirt by footsteps heavy from the weight of life. But they were feminine…that was for sure. The sound caused Lut to stop, empty coffee mug dangling from his fingertips. Lut paused, listening to the methodic traipse through the woods. A smile tightened his cheeks as he examined the long, milky-black nails of his free hand. He scratched his chin, small scales grinding against his nails, flaking away.

They always found him. This time had certainly taken longer, almost six months, but they eventually came to his door. They were self-centered in that way. If they all could refocus that determination, combining it with their book smarts, they could dominate the universe. He would fear them then. Yes. Lut giggled, twirling the ceramic cup around his fingers. Good thing they were too self-absorbed to apply their intellect.

He crossed the cavern in two steps, setting the cup on a granite countertop. The crunching outside stopped. She had arrived. Lut waited, glancing at the wooden door. He had stolen it from a monk’s castle. It fit well at the cave’s entrance. She shuffled her feet, dirt sifting under soft-soled shoes. Lut frowned. She doubted, second guessed. Maybe his night would remain filled with tea and study. He wouldn’t mind. No. Not at all. But a change in the routine was nice. Yes, a break from the ritual.

He sucked in the crisp, autumn air. He could smell jasmine and rosemary. He licked his lips, rough against his tongue. She smelled pretty, probably tasted pretty, too. He was sure she was pretty. One of those girls who spent hours admiring the reflection of their image. She sighed. Lut rubbed his fingers together. He wanted to see her. Yes. He needed to see what brought her. It had to be good. Yes. She wouldn’t venture out here if it wasn’t good. Come to the door, my love. I won’t hurt you.

The leaves by his threshold rustled. Lut repressed his giggle of glee. She mustn’t hear. She might leave if she hears him. Then it came, the iron rap against his door. He steepled his fingers, nails clicking as he tapped them together. He had missed this.

Lut straightened his grey sweater, frowning at the hole worn into the edge. His black slacks weren’t any better, hanging torn above his ankles. He tapped his toe nails against the stone floor. Well, she couldn’t expect much. It wasn’t like she had announced her visit. Lut skipped to the door, rested a hand on the metal handle, then pulled his shoulders back. He mustn’t slouch. No, no. The handle chilled his skin as he squeaked it sideways. The door swung inward, bringing with it the autumn breeze, sweetened by the decay of oak leaves…