Do Self-Destructive Characters Work in Books? 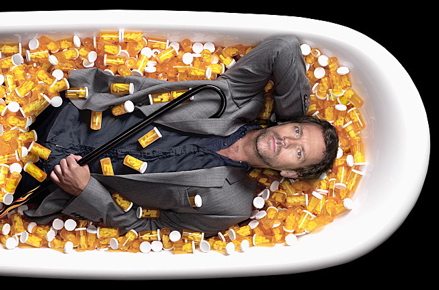 So far, I’ve only watched the pilot for the show “Black Box.” In it, the main character is a woman with Bipolar disorder. She’s highly successful when on meds, but crazy when off. However, the show posed the question if the meds held her back from her full potential (her greatest genius). It left me with the impression this show was going to be about her self-destruction. It wouldn’t be the first show. I loved watching the series House on Fox.  In the show, he was brilliant, but happened to have an addiction to Vicodin. Even in literature, we have Sherlock Holmes who was a drug addict, but a remembered detective—dare I say one people love?
This got me to thinking about the types of characters we like. Certainly there are a lot of reality television shows out there. If they are not competition based—and even some that are—it seems at least in America that these shows migrate toward the dysfunctional. People watch, not believing that people could be so troubled and still function in the world. What’s worse, a lot of them are now extremely rich due to the attention.
It causes me to wonder about the appeal. While I can’t stand the reality shows with this type of “character,” but I did love watching House. I haven’t yet decided on “Black Box” yet. In fact, I’m wondering if it’ll be too much. In fact, I told my father I didn’t want to watch her self destruct. That’s not entertainment to me. So, what’s the balance?

I think it goes back to two things. The first is the level of character flaws. They must be forgivable. For instance, House was a druggie and a jerk, but he saved lives. In fact, he would work himself to the point of destruction due to his obsession with solving a case. Now, there is a debate whether it was the people he was trying to save or solving the puzzle, but the “good” he was doing could not be ignored. However, I think the greatest asset to his flaws was Dr. James Wilson. He was undoubtedly a good character and one of House’s only friends. The fact that House had a friend meant there had to be redeeming qualities. It also provided the opportunity to see these qualities.
The second is the level of success. House was a highly successful doctor. He solved cases and saved lives. His drug addiction was more of a “struggle,” and, while it did hold him back and threaten his job at times, it never overtook him. In a way, he was a master of his addiction, or at least he seemed to think so. He might have instances (typically around season finale time) when things fell apart, but his life was not a complete mess.
I was trying to think of other characters in literature that had the same qualities and Sherlock Holmes is the only one I could think of, which makes me wonder if the appeal transfers well into the written word. If it does, I bet these two conditions still apply. What is your favorite self-destructive character?