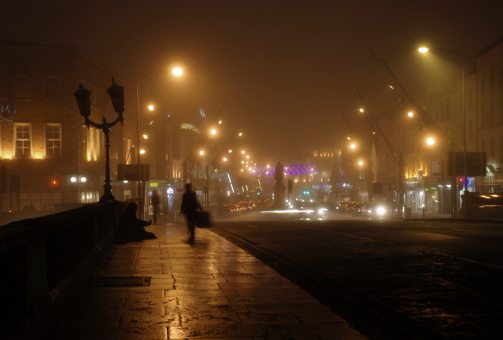 And now, the conclusion:

A few emotions traveled through Madison’s body when she saw him. Fear was first. It threatened her legs, wanting to send her fleeing outside. Familiarity was second. It had been five years, but he looked exactly the same: same black attire, same slicked-back hair, same foreign eyes pretending to be human. That brought so many faces back, faces she had tried to forget. People screaming, people scheming. Aiden, Wesley, and the others. Were they turned into Nightmares by now? Or had they escaped like her? Although, she still wasn’t sure how she had escaped. The final feeling was relief. She hadn’t thought this would work. Why would he come for her? Why would he remember her? Surely he had moved on.

The fact that he hadn’t was somewhat unnerving. If he hadn’t forgotten about her, then she was still in danger. That was the point of today, after all. And now they had answers: No, she was not safely forgotten. And yes, she still had to watch for signs of his return.

Madison crammed every emotion back into her gut and straightened. She had a job to do after all. “Didn’t expect to see you again,” she managed to say.
His eyes twinkled like a cat who had found a mouse to play with. “You must have missed me.”

“Didn’t think of you for a single day,” she said, hoping her eyes didn’t give her away.

He studied her, easing further into the room. He circled her, examining every inch. Madison tensed. She could feel his gaze crawling upon her skin, prickling against her. She had forgotten how tiny his presence made her feel. “You’re still denying it, I see.”

Madison glared at him. “Denying what?”

The fact he used the same words on her should be comforting. She knew this playbook. She had defeated it once before. Yet, she was not comforted. It ate at her. “Five years and that same line is the best you can do?”

The Lord of Nightmares shrugged. “You’re getting married in a non-church in the middle of sin city on Halloween.” He stopped in front of her and clasped his hands in front of him. “You are a Nightmare, my love. You should have just completed the picture and married me.”

Just like that flames burst around her, circling her. They licked at her skin, blocking any path of escape. Madison jumped. It’s not real, she told herself. But the heat that burned her legs begged to differ. A flame leapt at her and the smell of scorched hair hovered in her breath. Madison wanted to jump out of the fire. She wanted to flee. What was she doing? She could never truly defeat him.

She was one second from bolting when she finally caught hold of her nerves. She closed her eyes from the blaze and steadied her breath. In and out. In and out. With each breath, she chanted, this is not real. After a moment the blaze ended and all she could feel was his breath on her skin.

When she opened her eyes, his nose was almost touching hers. “You are one of us,” he insisted. “Genetic technicalities are the only difference. Forget this wedding nonsense and let me take you back with me.”

“What would be the pleasure in me giving up?” Madison asked. His breath smelled foul, rotting fruit and dying animals. It also had a metallic undertone which conjured up one image…blood.

Madison shook her head. “I did not call you. You are the one who came. Bored with your silly games? Want to give up?”

Fire flashed in his eyes. “David or Jasper…you will kill the weaker men who follow you.”

Madison’s hand moved without her thinking. She curled her fingers as her hand slapped across his face. Skin grated beneath her fingers. Besides that, it was like slapping a rock. She felt bones shift in her fingers as she finished the strike. She cringed against the pain, but did not back down.

The Lord of Nightmares stood there for a moment. Then his hand was against her throat. Blood pounded against her skull as her lungs screamed for air. She didn’t touch him though. She couldn’t. She felt the world spin and blackness form at the corners of her vision before he finally let her go.

The ground pounded against her, but she was too busy choking on air to notice the pain. He pointed a finger at her. “You’ll do well to remember who I am and your place.”

In an instant his presence was gone. Madison fought the tears that formed in her eyes as she gathered her breath. Then she rose, walked to the side of the room, and picked up a small nail stick. She scraped the skin and blood gathered under her nails and carefully placed it in a glass vial. “Genetic technicalities separate us. So let’s see if that helps me defeat you.”

The door creaked and Madison turned to find Jasper entering in a black 3-piece suit. He rushed to her side, his eye tracing her neck where no doubt bruises formed. “I shouldn’t have let you…”

Madison smiled at him, taking his hand in hers. “Never mind that. We came here for another reason, too.”

Jasper frowned. “I was hoping he wouldn’t come.”

“The fact we predicted he would is a good thing. We can defeat him if he comes after us again. But, for now,” she neared him, placing a hand on his cheek, “let’s forget about him.”

Jasper smiled. “You sure you want to marry me?”

Madison didn’t hesitate her nod. She grabbed his hand, leading him toward the door. “Besides,” she said over her shoulder, “we get a half off coupon for divorces.”

Follow Madison and Jasper in The Lord of Nightmares.